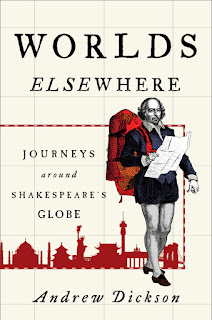 Ranging ambitiously across four continents and four hundred years, Worlds Elsewhere is an eye-opening account of how Shakespeare went global.  Seizing inspiration from the playwright's own fascination with travel, foreignness, and distant worlds - worlds Shakespeare never himself explored - Andrew Dickson takes us on an extraordinary journey:  from Hamlet performed by English actors tramping through the Baltic states in the early sixteen hundreds to the skyscrapers of twenty-first-century Beijing and Shanghai, where "Shashibiya" survived Mao's Cultural Revolution to become a revered Chinese author.

En route, Dickson traces Nazi Germany's strange love affair with, and attempted nationalization of, the Bard, and delves deep into their history of Bollywood, where Shakespearian stories helped give birth to Indian cinema.  In Johannesburg, we discover how Shakespeare was enlisted in the fight to end apartheid.  In nineteenth-century California, we encounter shoestring performances of Richard III and Othello in the dusty mining camps and saloon bars of the Gold Rush.

No other writer's work has been performed, translated, adapted, and altered in such a remarkable variety of cultures and languages.  Both a cultural history and a literary travelogue, Worlds Elsewhere is an attempt to understand how Shakespeare has become the international phenomenon he is - and why.

I'm going to put this out there before we even get started, I'm not a huge Shakespeare fan. It's not that I don't like him, but I can't say I would ever go out of my way to read one of his plays.  In college, I played Philostrate in a production of A Midsummer's Night Dream, set in feudal Japan.  I've enjoyed a few movie versions of Much Ado About Nothing, and I love the movie version of Titus Andronicus that I've seen.  And outside of mandatory reading in high school and college, that's the extent of my dabbling with Shakespeare  So for you die hard fans, I'm sorry that I'm not in love with the Bard, at least not as much as you are.

That lack of exposure to Shakespeare, is why I agreed to review this book.  I was intrigued by the concept; the author traveling the globe, learning how particular cultures absorbed and interpreted his works for their own.  For the most part, I really enjoyed the journey that Andrew Dickson took me on.  I do wish he would have been able to visit a few other countries, but I get that finances dictate how much global traveling you can really do.  And while there were moments that felt bogged down in detailed minutiae, I appreciated the work he put into the book, and his love for the subject shines through on every page.

After finishing the Worlds Elsewhere, while I can't say that my interest in Shakespeare's work has been increased, I will admit to having a little more respect for him, and the influence he has had on a global scale.  I don't think I truly had an appreciate, or understanding, of how popular he was across the globe, and how adaptable his works are to other cultures, at least not on the level I was exposed to in this book.  For that alone, for gaining a new appreciate for an author who is globally loved, I'm grateful for reading this book.

I would like to thank the publisher, Henry Holt, for providing a copy of Worlds Elsewhere, in exchange for an honest review.

I've only experienced the Shakespeare I was required to read in high school and I really don't remember much of that. My son is a huge Shakespeare fan, though, and took as many classes as he could in college. I bet he'd love this book.

This sounds like a very interesting book, Ryan. I am not a big Shakespeare fan either, but my husband and son are, and I am plan to try reading some of the plays in the next year or two. Much Ado About Nothing is the play I plan to read first.

I enjoy Shakespeare and love reading about him but I think it's best to actually see Shakesepeare acted out. Reading him is dificult. I bought a couple of his works that had absolutely phenomenal notes, last year, and that really helps. The better the footnotes or annotations, the more enjoyable the reading.

Ryan, I have never read Shakespeare but I'd be interested in reading this book and learning how the Bard's phenomenal work influenced cultures the world over. His plays have had a big influence on Bollywood films and they continue to do so.

Sounds like something I'd really enjoy. I haven't read a lot of Shakespeare but have seen his plays and the movie adaptations quite a lot.

I'm not a big fan of Shakespeare either, but have found his plays easier to take than actually reading the books. This one does sound interesting, as I'm curious why Shakespeare became so popular all over the world while other playwrights just faded away. Thanks for the heads up!