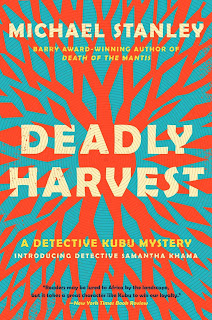 A young girl goes missing after getting into a car with a mysterious man.  Soon after, a second girl disappears, and her devastated father, Witness, sets out to seek revenge.

As the trail grows cold, Samantha - a new detective (and the only woman) with the Botswana police force - is reminded of a childhood friend who had gone missing, and she devotes herself to keeping the first case open.  she suspects that the girl was killed for muti, the traditional African medicine usually derived from plants and sometimes animals.  But recent evidence shows that human parts are being incorporated into certain potions to conjure up a supposedly more potent formula.  Detective Kubu joins forces with Samantha to take the investigation to the next level.

Meanwhile, Witness is convinced that his daughter, too, was murdered for muti - for a potion to ensure an election victory for opposition leader Marumo.  On the night of Marumo's win, Witness waits outside the politician's home and murders him before fleeing town.  Now Kubu and Samantha have yet another murder investigation on their hands, and the search of Marumo's home yields a sample of muti that confirms their worst fears: the formula includes traces of human DNA remains.

Kubu and Samantha are thrust into a harrowing race to stop a serial killer or killers - and those who would pay for their special, lethal muti.

Back on Thursday, September 22, 2011, I was lamenting the fact that I found myself falling into a pattern.  Back then I was agreeing to review books that sounded so good, I wouldn't do my diligent research into the book.  Over and over again, I found myself agreeing to review a book that was actually in the middle of a series that I've never heard of before.  On that day, I was reviewing Death of the Mantis, the book that precedes this one.  Back then I was picking book after book, series after series, and none of them from the beginning.  I said Death of the Mantis was worth the frustration,and it must have been since I was more than willing to read Deadly Harvest.

What I loved about the previous book, I still love with Deadly Harvest.  Kubu is one of those detectives that I could sit down with over a huge platter of pasta, some good wine, and enjoy every moment of the conversation.  He has a brain that is worthy of putting him amongst the best in the business, and one day I hope he will be considered one of them.  The secondary characters, from Kubu's family to Samantha and the rest of the police force, are strong well written individuals that add so much to the overall story.  Even the bad guys, and this time around, they are truly evil, are three dimensional nasty bits of work.

The mystery itself is one of those that pulls you in and never allows you to catch your breath or fully grasp the horrifying truth of what's been going on.  The idea of men, women, and children being slaughtered for their body parts, to benefit someone else, is revolting.  The fact that you can die because of your name, a name that someone else wants to harness for it supposed power, should scare the living daylights out of everyone who reads the events that take place in between the covers of Deadly Harvest.  The name of the book itself lends itself to the horror of the depravity needed to justify such actions.

I don't know if I will ever have the time to go back and read the books that took place before Death of the Mantis, but I'm pretty sure I'll continue along with the series as it goes forward.

The wonderful group at TLC Book Tours have generously offered my readers the chance to win a copy of this book for themselves.  The giveaway will last until 11:59 pm, CST, on 5/25/13.  You must be a resident of the United States to enter, and all you have to do is leave me a comment with your email address.

I have had my eye on this one and like his books. Would love to enter the contest.

I do love mysteries with exotic to me settings. And I actually don't mind starting in the middle of a series. Well, sometimes I don't mind.

Ryan, it's so good to see your words back on the page thanks for the great review :)
deb

This novel sounds unique and interests me greatly. Many thanks. elliotbencan(at)hotmail(dot)com

Thanks for this feature which I would enjoy very much. saubleb(at)gmail(dot)com

I saw this on BookTrib awhile back and thought it sounded really good. Great review, Ryan, as always. Thanks for the chance!

I think I'd enjoy a long dinner with Detective Kubu myself!

Sounds like a very good and interesting book. I just love a good murder mystery. Thanks for having the giveaway.