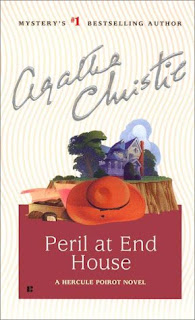 The Majestic Hotel seems the ideal retreat for Hercule Poirot - until he meets lovely Nick Buckley.  She's the last of a long line of Buckley's inhabiting End House, an imposing estate perched in isolation on the rocky cliffs of St. Loo.  And a lucky Buckley at that.  Claiming to have escaped three attempts on her life in as many days, Nick attributes the good fortune to the watchful guardianship of a beneficent ghost.  But an investigation into the dark corridors of End House leads the Belgian detective to fear that Nick's luck may be running out...

This was a rather quick read for me, which all the Hercule Poirot books are turning into.  I'm not sure if it's because the books are so good that I can't stop reading or if it's because Hercule grates on my nerves after a while and I just want it to be over.  I actually think it's a little of both but more of the fact that the books are just that damn good.

Once again Hercule proves why he is at the top of the game.  In the beginning, he and the reader, are taken in by the story being woven so brilliantly by Agatha Christie.  She lays down the clues and innuendos so subtly that both Hercule and the reader go with the flow and don't question what's being told.  Only at the end does Hercule figure out the truth and surprise us all with his brilliant "grey cells" once again

I must say that this books has a twist ending that while I may have had glimmers of in throughout the book, I did not see it coming.  This is probably one of the more interesting endings to a mystery book that I've read in a while, simply because of the red herrings and slight of hand used in telling the story.

It's a great example of how good Agatha Christie was at coming up with a mystery and a solution while at the same time filling in all the middle pieces.  She never gives you a mystery that you can't figure out for yourself, though she does make it really difficult for you.  And while Hercule can be a little grating at times, I never really hold it against him because he's so brilliant.

I have to admit that Poirot is one of my all-time favorite detectives, him and Holmes. I guess they do both have their annoying traits, but I love them.

Nice review, Ryan. I haven't read this one but now I'm craving some Agatha Christie . . .

Don't forget to submit for the next Agatha Christie Reading Challenge Carnival Ryan.

I'm excited because I think I have this one in my stack of Christie books to read!! I hope Poirot doesn't get on my nerves!! Loved your review.

You make this sounds so intriguing! I can't believe that as many mysteries as I've read, I haven't read any Agatha Christie.

I fell in love with Hercule - yes we are on a first name basis - when I was in grade school and happened upon Appointment with Death being aired on tv. From there I inhaled Christie's books. I have to admit I haven't touched one for about ten years now.

I've only read Miss Marple but I'll have to check Herule out - I do love Agatha Christie.