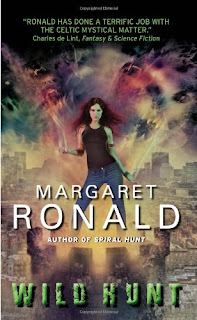 Genevieve Scelan thought she was done with magic.  She was wrong.

Sure, six weeks earlier Evie - bike messenger, supernatural tracker, and avid Red Sox fan - had been instrumental in bringing down the Fiana, the organization of magicians that had ruled Boston's undercurrent for hundreds of years. But now they were gone, Boston could breathe easy again, the Sox had a chance at the pennant, and Evie was ready to relax.

Except it turns out that when you take down the guy on top, everyone assumes you're going to fill his spot, and now Evie finds herself at the center of a whole lot of unwelcome magical attention. On top of that, a new client needs her to call up a family ghost and ask about a stolen inheritance; Evie's friend Nate has a supernatural problem of his own; and a legendary pack of hounds has been terrorizing Boston's undercurrent. And try as Evie might to deny the legacy that runs through her blood, when the Hunt is called, the Hound must run...

This is going to sound really strange but if I had written this review even a few days ago, I feel it would have been more positive.  For some reason over the last few days I've been going over in my head what I thought and felt while reading this book, and I'm now coming away with different thoughts.  I still really enjoyed the book and felt it was a good follow up to the first book in the series, Spiral Hunt, but now I'm also thinking it was a bit more confusing as well.

I'm absolutely in love with both Evie and Nate after this book and I was ecstatic to see them grow as characters and as a couple. Evie is forced into a situation where she is out on a limb with no sign up being able climb back down. With the defeat of Fiana, she is now being looked up to as the assumed leader of the magical community of Boston. Who else but the one who defeated the magic mob would take over? Nature abhors a vacuum, power can't survive in one. Evie needs to decided what she cares about more, her own life or that of the city. The choices she makes on the way will thrill and fascinate you. Evie is written with such a sense of humor that you can't help but like her and root for to come out on top.

Nate on the other hand is going through changes of his own.  He is still taking care of his younger sister, who seems to be growing in her own powers, and having to deal with a long absent father who wants to talk to him.   Little does Nate know but he is about to need Evie in a way that he never anticipated or that his father will be the catalyst for the change he is about to go through.

The characters and how the events they are participating in change their lives, is what I loved about this book.  They are both so human and so real that you as the reader are not only able to understand every decision they make, but you are hard pressed to think of a different way to handle them.

Now to what I'm not so sure I liked as much, namely that this book had way too much going on.  Evie is such a fun character that you want more of her and less of the crazy circumstance she finds herself in.  This book is chalk full of Chinese mythology, ghosts, time travel, lycanthropy, the Wild West, spirit roads, water spirits, the Wild Hunt, and the Gardner Museum.  There is so much going on that you almost feel sorry for Evie, she is never really able to stop and catch a breath.  Now since this is an urban fantasy book, every single element comes together at the end, but sometimes it's a little distracting to keep track of everything that is going on.

Even with all that being said, this was a solid second book in a series that I plan on following for as long as it lasts.
Posted by Ryan at 1:00 AM

I often wonder why the author has the character confronted with so much!! At times it seems confusing and you wonder how they kept it all together in the end. Still sounds like a fun read though!

Another great review! You're right, there was a lot going on in this book. But if we were confused, imagine how poor Evie felt! :)

The many different things going on is part of what I loved about these books. I like how my head is spinning then in the end it all does fit together in a strange way. :) I am very curious about the end of this book though. I asked a question on my blog after writing my review of this one.

If you would like to check it out. :)
http://melissa-melsworld.blogspot.com/2010/06/book-review-wild-hunt.html

I am looking forward to Margaret writing book 3.